An arrangement under which the taxpayer maintained control of a company that it effectively had sold to a purchaser until all the taxpayer's shares were redeemed was found to be an arrangement that was structured to circumvent the application of s. 55(2) and, therefore, to be covered by s. 55(4).

Parent reps that he will control the TCs for commercial reasons
This is amended by 2018-0778931R3.

A DC which holds a rental property and an investment portfolio and is owned by Parent and his four children will spin off its investment portfolio in reliance on the s. 55(3)(a) exception to four TCs mostly owned by each of the four children. However, parent will have control of each TC by being issued special voting shares on their incorporation.

The CRA tags mention s. 55(4) as a provision that it considered relevant: access to the s. 55(3)(a) exception was assisted by or depended on Parent controlling all the corporations involved in the transactions; the special voting shares of Parent likely had minimal economic attributes; and Parent’s will bequeathed them to the respective children. In this regard, the ruling letter indicates that:

[N]one of the purposes of Parent acquiring and maintaining voting control of the [TCs] is to cause his children to be related to the [TCs] so that subsection 55(2) would not apply to any of the deemed dividends resulting from the Proposed Transactions since Parent intends to exercise the same degree of control over each of the [TCs] that he currently exercises over DC.

s. 55(3)(a) split-up between Newcos for two siblings which were related due to multiple-voting shares held by the father’s and mother’s Holdco
clarifications re division between beneficial and registered ownership of buildings were made in 2017-0704351R3

s. 55(4) not engaged where transactions eliminate shareholdings but not unrelated status of unrelated person 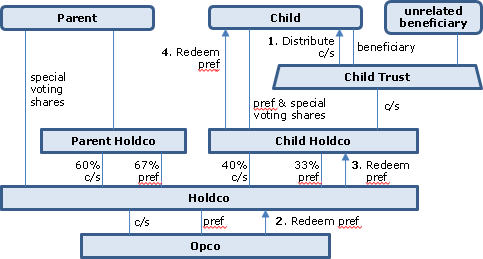 The wholly-owned subsidiary of Holdco (Opco) redeems preferred shares, following which Holdco redeemed preferred shares held by Child Holdco, following which Child Holdco redeemed preferred shares of Child. There otherwise would have been a resulting significant increase in the direct interest of an unrelated person (Child Trust) in the dividend recipient (e.g., Child Holdco). In order to avoid this result, at the beginning of the above series of transactions, Child Trust distributes its common shares of Child Holdco to Child qua beneficiary (i.e., to a person related to the dividend recipients). In finding that s. 55(4) does not apply, CRA stated:

[T]he purpose of the transaction was not to have people become related to each other. In fact, despite the transaction, Child Trust would continue to be an unrelated person for the purposes of section 55 respecting the other taxpayers in the situation described. In addition, all taxpayers in the described situation, other than Child Trust, would continue to be related to each other for the purposes of section 55. …

Thus, subsection 55(2) would not apply in the situation described above to the extent that none of the occurrences set out in subparagraphs 55(3)(a)(i) to 55(3)(a)(v ) occurred as part of a transaction or event or a series of transactions or events as a part of which the dividend was received.

s. 55(4) inapplicable if the principal reason for parent’s control of DC was parent's economic interests

If a butterfly split-up of a distributing corporation (DC) between the two corporations of the two children of a deceased parent had instead been effected during the lifetime of the parent (controlling DC), would it have been necessary to deal with the proportionality test in the division of the property?

CRA indicated that it accepted that the s. 55(3)(a) exemption may apply where the share ownership includes siblings, as long as the presence of their parents as shareholders allows the s. 55(3)(a) exemption to apply. However, this exemption will not be available under s. 55(4) where one of the purposes of the transactions was to cause persons to be related or a corporation to control a corporation so that s. 55(2) did not apply. In this regard, it stated:

[T]he CRA has already taken the position that subsection 55(4) should not apply where the primary reason for a shareholder to hold a sufficient number of shares of the capital stock of a corporation to control it was to protect its economic interests.

potential application of s. 55(4) where increase of interest of siblings companies is sheltered by control of Father – unless he held his shares to protect his “economic interests”

After finding that the s. 55(3)(a) exceptions otherwise applied respecting the deemed dividends arising on the cross-redemptions, CRA turned to s. 55(4) and stated:

… .Under [s. 55(4)] it must be demonstrated that none of the main reasons for the events or transactions is to cause persons to become related to each other so that subsection 55(2) would not apply to a dividend.

… Based solely on the information provided in your request, it is not possible for us to determine whether subsection 55(4) could be applicable in the Particular Situation. ...

[T]his Directorate has previously taken the position that subsection 55(4) should not apply where the principal reason for a shareholder holding a sufficient number of shares of the capital stock of a corporation to control it was to protect the economic interests of the shareholder.

CRA has indicated that s. 55(4) should not apply where the parent retains control of the corporate group in order to continue being involved in the management of the underlying business and in order to protect the parent's investment - or in order to maintain a significant dividend income.