CRA considered that where a Canadian target is indebted to a subsidiary under a U.S.-dollar loan with an accrued foreign exchange loss and it is amalgamated with the sub on the date of its acquisition then, assuming that the amalgamation is not time-stamped and no s. 256(9) election is made, that FX loss will disappear rather than being recognized under s. 111(12). In particular: 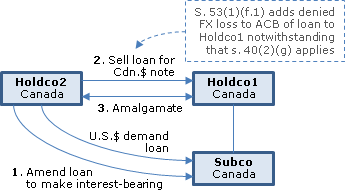 Holdco2, which is wholly-owned by Mr. X (a Canadian resident), made seven non-interest-bearing demand U.S-dollar loans (collectively, the "US Loan") to another Canadian corporation ("Subco") which was wholly-owned by a Canadian corporation ("Holdco1"). Holdco1 is controlled by Mr. X through non-participating voting shares and its non-voting common shares are held by family trusts. There is an accrued FX loss to Holdco2 on US Loan.

The US Loan amendment will not result in its disposition nor a gain or loss under s. 39(2). The denied capital loss for Holdco2's disposition of the US Loan will be added to Holdco1's ACB for the US Loan under s. 53(1)(f.1). S. 80.01(3) will apply on the amalgamation (no forgiven amount). 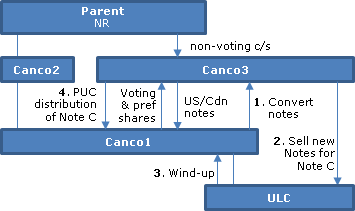 Canco1 holds all the outstanding voting shares of Canco3, and also is obligated to Canco3 under non-interest-bearing U.S.-dollar debt evidenced by demand notes ("Notes A") as well as further non-interest-bearing Canadian-dollar debt to be subsequently evidenced by notes (the "Canco1 Note A"). The fair market value of all such debt is substantially lower than its adjusted cost base to Canco3 (equal to its principal). In addition, there is an accrued FX gain to Canco1 on Notes A. The non-voting common shares of Canco3 are held by a non-resident public company (Parent), which also is the indirect parent of Canco1.

to eliminate the Canco1 debt without a merger of Canco1 and Canco3 by way of amalgamation or wind-up, which is not a viable alternative.

ATR-66, which contained out-of-date statutory references, was cancelled effective September 30, 2012. This "cancellation…does not represent a change in the CRA's view as to whether the general anti-avoidance rule would apply to the transaction described therein."

LossCo, which is insolvent, and ProfitCo, are both indirect subsidiaries of a foreign parent. LossCo is indebted to ProfitCo under the LossCo Indebtedness. (Steps 5-6 of the above diagram are discussed under s. 111(1)(a)). 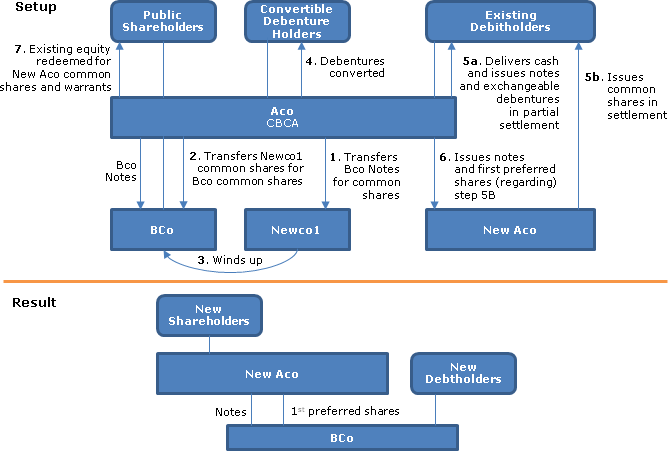 Aco is a Canadian public company holding interest-bearing promissory notes (Bco Notes) and shares of a Canadian subsidiary (Bco). Preliminarily to a Plan of Arrangement (referred to in Steps 4 to 7 of the above diagram and summarized under s. 80(1) - forgiven amount): 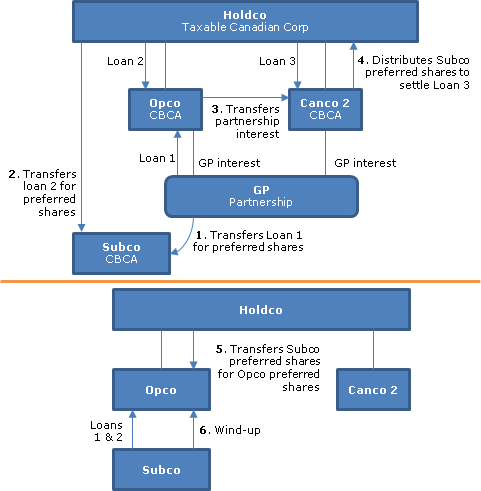 The proposed transactions will be implemented before a potential acquisition of control of the foreign parent (which would "grind" the adjusted cost base of Loans under s. 111(4)):

Parent, which is in CCAA proceedings, owns all but one share of Forco, which was incorporated outside Canada but whose central management and control is in Canada. Forco holds a non-interest-bearing note (the Forco Note) of Parent as its only substantial asset. The Partnership of which Parent is the majority partner and a CBCA subsidiary of Parent (Subco) is the other partner holds, as its only asset, a U.S. dollar non-interest-bearing note (the GP Note) owing by Parent with a latent FX capital loss to the Partnership.

no need for s. 80.01(4) election if assets of sub in the amount of the debt owing to the parent are distributed on the winding up in payment of that debt

If by virtue of a specific agreement made at the time of the winding-up, a debt can reasonably be regarded as settled for an amount not less than the principal amount of the debt, the debt has been discharged in full and section 80 would not give rise to any tax consequences. In general, in the case of a sole shareholder, settlement of the debt may be by way of an adjustment to the amount received by the shareholder on receipt of the liquidated assets in settlement or extinguishment of the debt.

In our view, if property of Subco with a FMV equal to the balance of the debt owing to Parentco was transferred to Parentco in payment of that debt, there would be no tax consequences under section 80 and subsection 80.01(4) would not apply. 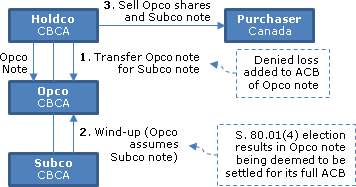 The Taxpayer entered into the "Purchase Agreement" for the purchase of a limited partnership (the "Partnership") with substantial current losses. The partners were the limited partners, namely, the "Trust" (the holder of essentially all the LP units other than a special unit held by "Parentco" with no income entitlement) and the "General Partner," a subsidiary of Parentco.

In finding that the debt parking rules did not apply, the Directorate noted:

After noting a current GAAR review by Aggressive Tax Planning, the Directorate stated that LeCavalier "supports the application of GAAR… where the debt parking rules…were considered to have been misused or abused."

S.80.01(8) would, but for the 80% role, have applied in the situation where OBCO, which is owned on a 50/50 basis by an individual (X) and an unrelated corporation (ACO), and a corporation (BCO) wholly-owned by (X) acquires both shareholding in OBCO of ACO and the debt owing by OBCO to ACO.

Do ss. 53(1)(f.1) and 80.01(8) apply simultaneously when Corporation "X" disposes of its debt of a wholly-owned corporation to another taxable Canadian corporation (“Corporation "Y") with which it is related only because of s. 251(5)(b)? After indicating that the capital loss denied by s. 40(2)(e.1) is added by s. 53(1)(f.1) to the ACB of the debt “immediately after the acquisition of the debt,” CRA stated (TI translation):

[T]aking subsections 80.01(6) and (7) into account, the debt becomes a parked obligation at the time of its acquisition by Corporation "Y" and, therefore, the ACB of the debt to the holder should be established precisely at that moment. Since this determination is made at a time that precedes the adjustment provided for under paragraph 53(1)(f.1), it could be ["se pourrait"] that this deeming rule in paragraph 80.01(8) results, under these circumstances, in a forgiven amount that is subject to the application of section 80.

If the Canadian-resident "Individual" makes a s. 50(1) election respecting a loan owing to him by an insolvent CCPC of which he is the sole shareholder, will the debt parking rules apply?

"Section 79 has priority over section 80 except if paragraph 80.01(8) has applied in a previous year." [Translation]

An adult son was lent $100,000 by his father under a demand promissory note. The prescription period under the Quebec Civil Code was three years, so that after that point, the note ceased to be enforceable in a legal action.

CRA confirmed that s. 80.01(9) did not apply as the debtor and creditor were related. Respecting whether the debt forgiveness rules nonetheless could apply on general principles as a result of the prescription, CRA stated (TaxInterpretations translation):

[A] debt is settled or extinguished if there is an extinguishment or settlement of the debt at law. The question as to whether the Note could otherwise be extinguished in the situation described above depends on the relevant facts and the applicable civil law.

The creditor forgave a debt pursuant to an agreement with an improved fortunes clause, such that the forgiveness was subsequently cancelled. After finding that that the debtor corporation was not entitled to a deduction when the debt thus became due again or was repaid pursuant to this clause, the Directorate stated:

Note that in a situation where a debt is deemed to have been settled pursuant to subsection 80.01(8) or (9), subsection 80.01(10) provides for a deduction where a debtor makes a payment in satisfaction of the principal amount of the debt at a time later than the time the debt was deemed to have been settled. In our view, Parliament intended this provision to ensure that payments of the debts in question are otherwise deductible.