Where an individual (the transferee) has acquired an income-producing property from his spouse and given to the transferor a demand promissory note bearing interest at the prescribed rate in effect at the time of the transfer, a subsequent lowering of the interest rate to the prescribed rate in effect at the subsequent time would result in the condition in s. 74.5(1)(b)(i) no longer being satisfied. Accordingly, the attribution rules would apply in respect of the property from the time of the resetting of the interest rate.

If, instead, the promissory note was forgiven, the requirement in s. 74.5(1)(b)(i) would no longer be satisfied.

No payment will be considered to occur pursuant to an agreement between the parties to the effect that interest on a promissory note will be deemed to be paid and then loaned back to the borrower.

Summerville, "Income Splitting may be Implemented by Transferring Residential Property to Spouse", Taxation of Executive Compensation and Retirement, December 1989/January 1990

In a 24 August 89 Technical Interpretation, RC passed favourably on a transaction whereby a high income spouse transfers to his low income spouse an investment portfolio in exchange for a 25% interest in their residence which had been paid for (through contributions to the mortgage) by the low income spouse.

Can the interest rate on a loan to a spouse or other family member remain fixed at the current prescribed rate of 1% (so that there is no income attribution) where the loan is a demand loan with no term, or it has a term of say 20 years? CRA stated:

Where an individual (the transferee) has acquired an income-producing property from his spouse (the transferor) in consideration for a demand promissory note bearing interest at the prescribed rate in effect at the time of the transfer, a subsequent agreement of the transferor to make a loan to the transferee at the lower prescribed rate prevailing at the time of the loan, with the loan proceeds being used to repay the demand promissory note, would not result in the exception in s. 74.5(2) being applicable because the proceeds of the loan would be used to repay the note rather than to generate any income or produce gain.

No attribution of income will be made in the situation where father loans a newly-established trust with his minor children as beneficiaries the sum of $100 at a commercial rate of interest, followed by the trust buying common shares of a small business corporation for $100 which then pays a dividend on its common shares which enables the trust to repay the loan plus the accrued interest thereon.

Re criteria for a "genuine" loan.

accrued interest cannot be “paid” for s. 74.7 purposes by issuing a promissory note

After noting that since the indebtedness at issue was a loan, the applicable requirement instead was in ss. 74.5(2), CRA stated;

Paragraphs 74.5(2)(b) and (c), as with subparagraphs 74.5(1)(b)(ii) and (iii), are part of a set of rules intended, inter alia, to prevent a taxpayer and the taxpayer’s spouse from sharing income from property (including by means of loans bearing insufficient or no interest) to reduce the total amount of tax payable on that income. In that context, a textual, contextual and purposive interpretation of paragraphs 74.5(2)(b) and (c) and subparagraphs 74.5(1)(b)(ii) and (iii) favours a more restrictive interpretation of the word "paid", according to which the issuance of a note, although irrevocable, unrestricted and payable on demand, does not satisfy the requirement provided for in those paragraphs and subparagraphs.

It follows that … the exception provided for in subsection 74.5(2) could not apply.

s. 74.5(3) busting of attribution occurs even if they were living separate and apart for under 90 days before the death to the transferee common-law spouse

Two common-law partners - within the meaning of s. 248(1) - separated on June 1, 2012 and started living separate and apart because of a breakdown of their common-law relationship. On separation, a rental property was transferred between them for no consideration on common-law spouses, and the transferee (the “Transferee”) died on August 14, 2012.

2. Which of the transferor ("Transferor") or the Transferee is taxed on the rental income from June 1, 2012 to August 14, 2012, on the taxable capital gain and recapture of depreciation from the deemed disposition on death?

RC is aware that the provision may not be workable, because spouses typically are unable to settle the terms of their separation agreement in the year of separation, and until then they will not know whether they wish to elect.

unborn children and spouse not designated persons re freezer trust

As a result of a previous estate freeze, A holds the voting freeze preferred shares of Opco (which is not a small business corporation) and a discretionary family trust (“Initial Trust”), with spouse and children as beneficiaries, holds the non-voting common shares. Now a further freeze is implemented under which Initial Trust exchanges its shares for preferred shares, and New Trust, with spouse children, grandchildren and family corporations as beneficiaries, subscribes for new non-voting common shares. CRA stated:

[O]nly a person under the age of 18 who does not deal at arm's length with a trust could logically be a designated person in respect of a trust.

In light of the foregoing, Mr. A’s spouse cannot be a designated person in respect of Initial Trust.

After indicating that s. 74.4(2) nonetheless potentially might apply respecting A’s spouse viewed as a designated person in respect of A, on the basis “that the transfer of property made during this [2nd] estate freeze was made indirectly by Mr. A by means of Initial Trust,” CRA also noted: 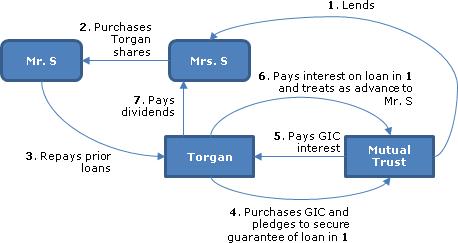 For creditor-proofing reasons, the taxpayer sold shares in a family real estate development company ("Torgan") to his wife, and used the sales proceeds to satisfy shareholder loans owing by him to Torgan. Torgan, in turn, used the proceeds to purchase a GIC, which it pledged (as security for a guarantee) to a trust company which had lent the shares' purchase price to the taxpayer's wife. He sought to have his wife's related losses (mostly due to interest on the loan) attributed to him pursuant to s. 74.1(1).

After finding that the loan interest was not deductible, Paris J. went on to address the Minister's argument that if, in fact, losses had arisen on the wife's share investment, the attribution of such losses should be denied pursuant to s. 74.5(11) as the shares had been transferred in order to reduce the taxes payable on income derived from the Torgan shares. In dismissing this alternative argument, Paris J. (after referring, at para. 52, to the reference in para. 28 of Canada Trustco to an "objective assessment of the relative importance of the driving forces of the transaction") accepted the taxpayer's evidence that the transactions were carried out in order to pay off the shareholder loans to him and for creditor proofing, and that tax reduction was not one of the main reasons for the transactions.

As a result of a rule change of the Dental College, it was necessary for ownership of all the voting common shares of the professional corporation through which the taxpayer carried on his dental practice (“MDPC”) to be transferred from a family trust to him. This was accomplished by those shares being distributed out of the trust to his wife qua capital beneficiary in 2002, followed by their immediate gifting to him. Dividends paid by MDPC to the taxpayer in 2010 and 2011 were reported as his wife’s income under s. 74.1(1), but the Minister assessed to include those dividends in his income under s. 74.5(11).

[T]he transfer of the shares from her to Dr. Mady could not have been intended to reduce tax payable on the dividends received on the shares. She was already the shareholder and the lower income earner.

… The rules of the Royal College of Dental Surgeons prohibited Mrs. Mady from owning the shares. If she could not own the shares she could not receive dividend income thereon. Therefore, dividends could not be subject to tax in her hands at a lower tax rate than that which applied to Dr. Mady. …

… [Per] Groupe Honco … “one of the main purposes” … “…implies that a taxpayer may have more than one main motive in acquiring shares”. Even if I accept that one of the purposes of the transfer from Mrs. Mady to Dr. Mady was to ensure compliance with the new [Dental College] share ownership restriction…, this does not override…that the other main purpose of structuring the transaction … was to trigger the application of the attribution rules… .

Words and Phrases
one of the main purposes

attribution to income-split with professional's spouse

A professional who formerly operated an unincorporated professional practice formed a corporation with him and his spouse each subscribing for shares, and her then gifting her shares to him so that he then was able to comply with a requirement that professional corporations be solely owned by professionals. Did s. 74.5(11) prevent attribution of dividend income to her on the shares which she had gifted to him?

After noting the submission that "the sole reason for the transfer of the shares from the spouse to taxpayer was to comply with the requirements of the corporation to qualify as a professional corporation," CRA stated that:

[I]t is possible that subsection 74.5(11) may apply… if one of the main reasons was to reduce the amount of tax that would…be payable under Part I on the income… derived from the property… .

use of gift of discretionary shares to address PFIC issues

Ontario, Alberta and Newfoundland generally prohibit corporate ownership (e.g., through a holding company set up by alien family members) of a PC. In this context, a possibility for dealing with the PFIC issues in the second situation is to issue Neuman (discretionary) shares, having a modest value, to the U.S. spouse, who then gifts them to the professional. From a U.S. perspective, dividends paid on the shares are legally the property of the non-resident alien professional, and thus not subject to U.S. tax.

For Canadian tax purposes, the gift will cause dividends on the shares to be subject to attribution under s. 74.5(1). However (p. 935):

There is a risk that the CRA would see this gifting strategy as abusive, and apply an anti-abuse rule [in s. 74.5(11) that would void the attribution.

…It could be argued [however] that in this case, the family ,member would retain the shares but for the US tax consequences of doing so. The attribution merely puts the family member in the same position as he or she would be absent the gift.