Florida and Delaware LLPs and LLLPs subject to s. 93.2

CRA briefly noted that s. 93.2 would apply to Florida and Delaware LLPs and LLLPs that are treated by CRA as corporations.

membership interest in Dutch cooperative ruled to be shares

Before ruling that the contribution of shares of a Netherlands private limited liability company to a newly-formed Dutch cooperative (DC), in consideration for a credit to the membership accounts of the contributing foreign affiliates equal to the FMV of the contribution, was eligible for s. 95(2)(c) rollover treatment, CRA ruled that DC was a corporation for the purposes of the Act, and a non-resident corporation without share capital for purposes of s. 93.2 and that membership interests in DC will be deemed to be shares of a single class by s. 93.2(2).

The "formula" for the equity interests in a U.S. LLC provides for the manager to receive incentive compensation in the form of a 2% income allocation for management, and a 20% profit share in certain circumstances. The residual profits are shared in a sharing ratio. Would there be 3 classes of equity interests, the first providing for the 2% income allocation, the second for the 20% incentive allocation, and the third for the residual amounts? Secondly, if the manager had a special voting right, would this also constitute another class of equity interest? Thirdly, if the income is to be allocated based on, for example, the revenue or net income for the year, between 2 owners say, A and B, would each of A and B have a distinct equity interest, where the value of these equity interests may change from year to year (like 2 separate classes of common shares) – and, if so. is there a disposition when the equity interests change? CRA stated:

In response to your third and fourth questions, in cases where the non-resident corporation's income allocation could vary from time to time, we would expect that, in most cases, the differences in allocation would be due to differences in the rights and obligations of the equity interests which would result in different classes of shares being deemed to exist… .

The TI involves a US LLC that is formed "in a way similar to "a partnership, with the equity interests being referenced by a formula." In practice, a US LLC's constituting documents, such as an LLC agreement, are commonly drafted to divide the LLC's capital into separate units that are labelled as shares, sometimes with different classes (commons and preferreds). It is unclear whether, in those circumstances, proposed section 93.3 requires a taxpayer to go through the TI's analysis to determine whether there are different classes for the purposes of the Act and whether those classes differ from the legal classification.

Proposed section 93.3 [now 93.2] applies to a non-resident corporation's taxation years ending after 1994, unless an election is made to apply the rules prospectively to taxation years ending after July 12, 2013 (when the proposals were issued). For years in which proposed section 93.3 does not apply, questions remain. Regardless of how a US LLC is formed, does its entire capital comprise one single class divided into 100 shares, based on the CRA's administrative position in Interpretation Bulletin IT-392? If the answer is yes, how does a taxpayer deal with the transition from the ownership of shares in one class to the ownership of shares in other classes? None of the rollover provisions for share-for-share exchanges applies.

s. 95(2)(c) rollover can apply on a dropdown of shares made to an LLC as a contribution of capital rather than for “share” consideration 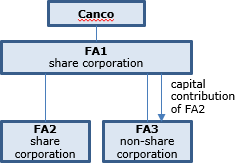 Canco owns all the shares of FA1, which owns all the shares of FA2 and all the member interests of FA3, which is a “non-resident corporation without share capital” as per s. 93.2(1). Based on the application of ss. 93.2(2)(a), (b) and (d), FA3 has 100 shares of a single class of its capital stock, which shares are deemed to have rights and obligations that are the same as those of the corresponding equity interests. FA1 transfers all of its shares of FA2 to FA3 as a capital contribution, i.e. no new member interests are issued by FA3. How would the CRA apply s. 95(2)(c)?

[D]espite whatever textual challenges might exist… on a unified textual, contextual and purposive analysis paragraph 95(2)(c) applies so as to result in a rollover… .

More specifically, provided this transfer is done in a manner that increases the fair market value of the deemed class of shares of the capital stock of the “non-resident corporation without share capital” (FA3) by an amount equal to the fair market value of the FA2 shares transferred and provided no election is made under paragraph 93.2(3)(b), paragraph 95(2)(c) would apply with the result that the cost of the FA3 shares that are deemed to be owned by FA1 immediately before the transfer will be increased by an amount equal to the relevant cost base to FA1 of the shares of FA2 so transferred and FA1 will be deemed to have disposed of the shares of FA2 for that same amount.