Subsection 92(1) - Adjusted cost base of share of foreign affiliate

Two wholly-owned U.S.-resident subsidiaries of Canco (CFA1 and CFA2) carry on a U.S. active business through a U.S. general partnership (FP) which, in turn, holds NRCo (U.S.-resident and owning investment property) and Holdco (a taxable Canadian corporation). Periodically, NRco and Holdco pay cash dividends to FP ("Foreign Dividends" and “Canadian Dividends”), which are then distributed by FP to CFA1 and CFA2. All entities have calendar year ends.

After noting that NRCo was a foreign affiliate of Canco for s. 113 purposes, but instead of FP for s. 91 purposes, CRA stated:

Since the taxation year referred to in the [s. 92(1)(a)] is that of the taxpayer resident in Canada, it is our view that in retroactively computing the ACB of a share of a foreign affiliate held by that taxpayer as at any particular time during that taxation year, (including a point in time before the end of the taxation year of the foreign affiliate), an amount equal to the amount which by reason of subsection 91(1) of the Act is required to be included in computing income of the taxpayer in respect of such share for the year, would be added. Accordingly, in the circumstances you have described, in computing the deduction under subsection 91(5) available to C in respect of the dividend from F, the subparagraph 95(1)(b)(i) amount at a time immediately before the dividend would include the amount required to be included in income in respect of the shares of F by reason of subsection 91(1) in computing C's income for the 1990 taxation year.

Dispute as to whether FA earns ABI or FAPI (p. 4)

Assume that Canco owns CFA and that the relevant years are all before 2012. In year 1, CFA earns income of $1,000; there is no foreign tax. CFA pays a dividend of $1,000 to Canco, either in the year in which the income is earned (after the first 90 days) or at any time in any subsequent year. Canco is of the view that CFA's earnings are income from an active business and exempt surplus, and the CRA, is of the view that the earnings are FAPI and taxable surplus….

Distinction between "required to be included" and (factually) "included" (p. 5)

The Act distinguishes between amounts "required to "be included" and amounts "included" in a number of provisions. In Quigley (96 DTC 1057 (TCC), cited in Skinner, 2009 TCC 269), the TCC referred to a similar amendment in the domestic shareholder loan and repayment provisions: "The reason for the amendment is obvious as it was arguable that a deduction would result from repayment even if there were no prior inclusion."…

Effect: statute-barring does not start running until FAPI is distributed (p.5)

[U]nder the amended legislation, if year 1 is still open to assessment, the CRA can reassess and include FAPI in Canco's income under subsection 91(1) as the Act requires. Alternatively, the CRA can ignore the mandatory FAPI inclusion and simply not assess a FAPI inclusion. The CRA can instead assess the year or years in which CFA pays dividends, and indirectly tax the FAPI by denying the section 113 deduction and assessing the dividend as having been paid out of taxable surplus with no offsetting relief under subsection 91(5): FAPI was not "included" in Canco's income (according to Skinner, as determined by the CRA's final assessment for the year), and thus there was no ACB addition under amended paragraph 92(l)(a). The dividend from CFA to Canco is a transaction that gives rise to the additional, three-year reassessment period, and so the CRA can now circumvent the normal reassessment period for the assessmentof FAPI by taxing it as part of a taxable surplus dividend….

Addition under s. 92(4) of proceeds on partnership interest disposition where previous s. 113(1)(d) deduction, even where a rollover transaction (p.6)

A corporation resident in Canada (CRIC) may hold shares of a foreign affiliate (FA) either directly or through a partnership. … [I]f the CRIC disposes of its interest in the partnership, subsection 92(4) may add an amount to the proceeds of disposition if, before that time, the FA paid a dividend to the partnership out of its pre-acquisition surplus (PAS) in respect of which the CRIC claimed a paragraph 113(1)(d) deduction. Fortunately, the qualifying return of capital (QROC) election may be used to avoid this anomaly if the FA operates in a jurisdiction in which the relevant corporate law allows for a return of capital.

Since a QROC does not result in income to the partnership [“P”] (or its partners), a paragraph 113(1)(d) deduction is not relevant. There is an immediate reduction [by the amount of the distribution, say] of $10 in P's ACB in the shares of FA pursuant to subclause 53(2)(b)(i)(B)(II). Further, when P distributes the $10, CRIC's ACB in the partnership interest is reduced by $10 pursuant to subparagraph 53(2)(c)(v). CRIC may then undertake internal rollover transactions without subsection 92(4) affecting the tax results. However, for this solution to be applicable, the distribution must be a reduction of the paid-up capital of the shares of FA under the corporate law of the jurisdiction where FA is located.

Similar results apply to a disposition by a partnership of its shares in the FA through the operation of subsections 92(5) and (6). Again, tax-deferred internal reorganizations may not be possible without a QROC election.

Subsection 92(5) - Deemed gain from the disposition of a share

Two Canadian corporations ("Canco" and "Subco") were the respective limited and general partners of "LP" which, in turn, held all of the shares of "Forco"), which paid a dividend from its pre-acquisition surplus in Year 1, with Canco including its share of the dividend in income and claiming the s. 113(1)(d) deduction. In Year 3 LP transferred all of its shares in Forco to newly-formed "ULC" in consideration for the issuance of shares, with a joint s. 85(2) election made designating the shares' ACB as the elected amount.

Should the deemed gain to Canco under s. 92(5) arising from the Year 3 disposition result in an adjustment to: the proceeds of disposition ("POD") reported by LP; the ACB of the Forco shares received by ULC; or the elected amount described under s. 85(1)(a)? CRA stated:

[T]he ACB of the Forco shares held by LP would not be reduced by the amount of the Dividend paid from Forco's pre-acquisition surplus. … Canco was deemed to realize a gain in Year 3… equal [to] the total of amounts deducted by Canco under paragraph 113(1)(d) in respect of Forco dividends received through LP that were paid out of Forco's pre-acquisition surplus, less any foreign tax paid in respect of Canco's share of those dividends. …[T]he deemed gain…would not result in an adjustment to LP's POD and…ULC's ACB of the transferred shares and, consequently, would not affect an "agreed amount" under subsection 85(1) by virtue of subsection 85(2).

no administrative relief even where rollover at partnership level 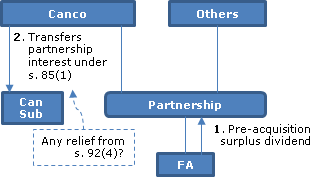 Will the CRA provide administrative relief in circumstances where the partnership interest or foreign affiliate shares are disposed of as part of an internal reorganization that, absent subsections 92(4) through (6), would occur on a tax-deferred basis? CRA stated:

[W]e have taken this opportunity to consult with officials within the Compliance Programs Branch, and we confirm that there is no administrative relief available in the circumstances that you have described.

Thus, instead of applying the regular ACB reduction rule in subsection 92(2) to pre-acquisition surplus dividends received on foreign affiliate shares held by a partnership, the Act defers the consequence of the pre-acquisition surplus dividend until such time as either the foreign affiliate shares or the partnership interest is disposed, and deems the Canadian corporate partner to have either a gain or increased proceeds of disposition in the same amount as the subsection 92 ACB reduction that would otherwise have applied.

Gain instead under s. 92(4) on FA share or partnership interest disposition (p.4)

[T]he problem is that the subsection 92(4) or (5) deemed proceeds/gain consequences will arise on any disposition of the partnership interest or foreign affiliate shares, regardless of whether the disposition occurs pursuant to a tax-deferred rollover.

In some cases, taxpayers holding foreign affiliate shares through a partnership may be able to use "self-help" to avoid the latent proceeds/gain recognition under subsections 92(4) and (5). In particular, a taxpayer may be able to avoid pre-acquisition surplus dividends and instead ensure that any such distributions are made by the foreign affiliate as a capital distribution to the partnership that can be electively treated as a QROC. However, this solution will not be available in all cases since capital distributions are not possible under the corporate laws of all countries or may be subject to more onerous approval requirements.

Additional problem where partner is an FA (pp. 8-9)

The problem created by subsections 92(4) to 92(6) is not limited to structures in which a partner is a Canco: the rules apply equally to offshore structures in which the partner is another FA of a corporate or non-corporate taxpayer. In the offshore context, if a transfer is otherwise subject to a rollover provision, a gain may be triggered because of the operation of subsections 92(4) to 92(6) and, depending on the excluded-property status of the transferred partnership interest or FA shares, a gain may give rise to FAPI or to hybrid surplus. This problem is exacerbated by subsection 90(2), which deems all distributions – whether they are legally dividends or returns of PUC – to be dividends for the purposes of the Act. A partnership that receives a legal return of PUC can elect under subsection 90(3) to treat the payment as a return of capital and not as a dividend in order to avoid the potential trap in subsections 92(4) to (92(6); but a significant onus is thus placed on the taxpayer in Canada to detect the existence of a triggering situation and then to ensure that the election is filed.