deemed resident s. 94 NRT member of U.S. LP is not resident in determining whether the LP is a reporting entity

A non-resident trust (“NRT”), which is factually resident in the U.S. but resident in Canada under s. 94(3)(a), owns over a 10% direct interest in a limited liability partnership (“LLP”) resident in the United States. All of the LLP’s other partners are non-residents of Canada. The LLP is the sole shareholder of a U.S.-resident C corporation or LLC. After noting submissions that s. 93.1(1) did not apply to the NRT and that “although subparagraph 94(3)(a)(vi) deems the NRT to be resident in Canada throughout the taxation year for the purpose of determining an obligation of the NRT to file a return under 233.4, it does not deem the NRT to be resident in Canada for paragraph 233.4(1)(c) purposes,” and an assumption that the LLP was a partnership for ITA purposes,” CRA stated:

[N]one of the entities would be a “reporting entity” in relation to the non-resident corporation and, as a result, no one would be required to file an information return in respect of the non-resident corporation. In particular, we agree that when determining if the partnership is a “reporting entity” for purposes of paragraph 233.4(1)(c), the NRT would not be considered resident in Canada.

The taxpayer (“RAR Canada”) was assessed under s. 162(7) for $12,500 in penalties for failure to file T1134 forms in respect of its specified foreign property, which consisted of a 28% interest in a Bermuda company. It also had not filed T2 returns until well after the years in question, but sustained losses during those years.

After finding that s, 152(4)(a)(i) permitted the Minister to reassess the penalties for years that otherwise would be statute-barred (seemingly based mostly on deficiencies in the taxpayer’s T2 returns) Bocock J went on to dismiss the taxpayer’s appeal of the penalties.

First, respecting a submission that “there was no purpose or utility” in filing the T1134 forms, he stated, (at para 35):

…[T]here is nothing in the Act to indicate that Parliament intended to relieve a reporting entity from filing a T1134 return where the Minister could otherwise discover elsewhere the information from material or other returns on file. …

Second, respecting a submission that the cost amount of the taxpayer’s investment in the Bermuda company had by the years in question declined in value due to its financial difficulties and was less than $100,000, Bocock J referred to public filings indicating that the taxpayer’s cost was $560,000, and stated (at para. 43):

[S]uch an assertion of diminished value is less probable than the clear historical record created contemporaneously and submitted by third party professionals for public disclosure and reliance.

Where an FA is the general partner of a partnership, is the $25,000 of gross receipts provided for in the definition of inactive FA in Form T1134 calculated based on the gross revenue of the partnership or on the amount allocated by the partnership to the FA? CRA responded:

[T]he CRA will want to know the level of activity of the partnership in order to establish that of its partners. In addition, it is our understanding that subsection 96(1) does not deem a partnership to be a separate taxpayer from the partners for the purposes of the provisions of section 233.4.

Will CRA provide relief under ss. 220(3) and (3.1) where taxpayers are unable to timely file their T1134 forms, including situations where there is a lack of sufficient financial information available within the newly restricted (6 month) time period that will be required to complete and file the forms?

CRA indicated that the information should be available in the case of a controlled foreign affiliate. Where it is not, however, it should still be possible to file the T1134 on time but with some missing information – but bearing in mind that penalties could thereby apply, subject to relief in the reasonable efforts exception of s. 162(5)(a), or the due diligence exception of s. 233.5(c.2).

CRA will consider a request for relief in the form of extensions and waivers of penalties on a case-by-case basis – although it would expect that the Minister will require more than “they just shortened the deadline from 15 to six months!”

comparison of T1134 and CbC reporting

Although the mandated requirement is a Finance requirement, what is CRA’s perspective on whether there is a need for T1134 filing in addition to the mandated country-by-country reporting?

CRA noted that the the T1134 return is used in risk-assessment. Generally, the T1134 reporting requirements are more detailed, while CbC reporting provides a higher level of information and uniformity of reporting across jurisdictions. As it gains more experience with the increased sources and new filing requirements, it may consider reviewing the overlap to reduce duplication.

a) If two Canadian corporations with CFAs amalgamate, would CRA consider extending its administrative relief re the avoidance of duplicative filings as a result of the resulting deemed year-end arising from the amalgamation?

b) Assume Canco1 transfers CFA1 to Canco2 mid-year. Would CRA consider extending its administrative relief to situations where multiple Canadian taxpayers or partnerships in a related group are required to file a T1134 for the same FA as a result of its transfer(s) within the group?

c) When can T1134 forms and attachments be filed electronically?

CRA’s responses are summarized below:

(a) CRA cannot provide that administrative relief, which could diminish the accurate history that the reporting was meant to provide. However, the T1134 supplements to be filed by the amalgamated corporations would require limited to no information in various areas of that supplement. For example, Section 3 of Part 2 of the supplement, and Sections 1-4 of Part 3 of the supplement, specifically refer to taxation years of the affiliate ending before the entity’s taxation year, whereas here the amalgamation would not cause a year-end for the foreign affiliates.

(b) Where multiple Canadian-resident taxpayers or partnerships in a group own a particular foreign affiliate for a moment in the year, but only one in the group owned the shares at the end of the tax-year, not having each owner file a T1134 for the FA would diminish the transparency of the offshore structures, which frustrates one of the purposes of the form.

(c) Electronic filing of T1134s, and T106 returns by mid-2017 is anticipated. Transmission of supporting financial documentation is still being worked on.

A non-resident corporation ("NRCo") distributed all its property during its 2012 taxation year on liquidation and was formally dissolved on December 31, 2012. Between the distribution and dissolution, a shareholder ("CanCo") of NRCo that held a 20% interest in NRCo became a resident of Canada for purposes of the Act. Both, NRCo and CanCo's had calendar taxation year-ends. CRA stated:

[D]espite the fact that NRCo had previously distributed its property…NRCo should be considered a foreign affiliate of CanCo in the taxation year of CanCo that ended December 31, 2012. 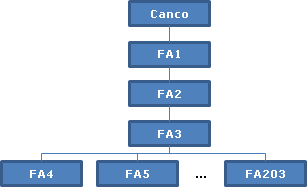 Because "equity percentage" in s. 95(4) includes indirect share ownership, the reporting requirements could lead to a considerable administrative burden where a taxpayer holds vertically structured foreign affiliates. CRA confirmed that, where a Canco holds an FA1, which holds an FA2, which holds an FA3 (all 100% ownership), FA3 should be reported in Section 3B of new Form T1134 twice, as both FA1 and FA2 hold 100% equity percentage in FA3.

In response to a further example where FA3 holds 200 additional FAs, CRA indicated that it is "considering developing administrative policy to provide relief in such situations."

CRA's change in the new Form T1134, which limits administrative relief for dormant or inactive foreign affiliates to situations where total investment in foreign affiliates is less than $100,000, is meant to eliminate a reporting gap between Forms T1134 and the "legislative thresholds for Form T1135."

Budget 2018 proposed that the requirement in s. 233.4(4) to file T1134s within 15 months of year end be changed to 6 months respecting taxation years beginning after 2019. Points made in this regard include:

For the purpose of completing Form T1134, the definition of gross receipts refers to any receipt received in the year, and not just income amounts. This would include all non-revenue receipts, such as loans, etc. The purpose of the test is meant to indicate the level of activity in the foreign affiliate.