There is no requirement that the acquisition or disposition of shares be undertaken by the corporation or another foreign affiliate. Thus, an issuance of shares to a third party (the situation currently addressed by regulation 5905(9)) should also be covered since it would be an acquisition by the third party. As a result of the substantially broader language in the new rules, the situations described above in which SEP is diluted will automatically trigger a gross-up of the underlying surplus balances without the need of a subsection 93(1) election.

Target, a public corporation incorporated under a Business Corporations Act (the “BCA”), did not carry on business in Canada and held two non-resident subsidiaries (Subco 1 and Subco 2). Only one shareholder of Target (“Specified Shareholder”) was a “specified shareholder” as modified by s. 88(1)(c.2)(iii), a non-resident shareholder but who had not (together with any non-arm’s length person) held 25% or more of any class of shares.

Assignor, a non-resident corporation whose sole shareholder was a non-resident individual (Mr. B), had agreed to acquire Target pursuant to a Plan of Arrangement. However, Assignor, a BCA corporation (“Parent”) incorporated on behalf of its subsequently-identified co-investor (Partnership 1), and Target agreed that Assignor’s rights and obligations under this agreement would be assigned to and assumed by Parent. Partnership 1 was controlled by a non-resident corporation (“Forco”), by virtue of Forco holding the general partner interest in the partnership that was the general partner of Partnership 1. None of the direct or indirect investors in Partnership 1 had any interest in Target before the Effective Time of the Plan of Arrangement referenced below, and they all dealt at arm’s length with Specified Shareholder.

Immediately thereafter, Parent and Target amalgamated with the same effect as if they were amalgamated under the provisions of the BCA to form Amalco. The Plan of Arrangement provided that the legal existence of Target did not cease and survived the Amalgamation (in order to avoid a disposition of the Subco 1 and/or Subco 2 shares for local tax purposes.) On the amalgamation, the shares of Target were cancelled and those of Parent were not.

The s. 212.3(7)(d)(i) form was filed respecting Parent’s acquisition of the Target Shares by Parent, and then subsequently revised and refiled to reduce the deemed dividend that would otherwise result under s. 212.3(2)(a), and the commensurate reduction of the paid-up capital in respect of the shares of Parent.

Pursuant to the BCA, Amalco was then continued into a non-resident jurisdiction as if it had been incorporated under the latter’s laws (the “Continuation”).

The transactions eliminate the entirely superfluous Canadian component of the Forco Group structure. As a distribution of the Subco Shares by Amalco to Partnership 1 or another entity of the Forco Group would trigger substantial local tax, there instead is the Continuation, which avoids such taxes. The s. 88(1)(d) bump of the Subco Shares minimizes Canadian taxes upon the Continuation.

S. 88(1)(d) ruling with provisos included a statement that the Continuation will not, in and by itself, cause the Subco shares to be ineligible property for purposes of s. 88(1)(c)(vi).

For the purposes of proposed subparagraph 88(1)(d)(ii), the prescribed amount in respect of the interest in Partnership is determined by the formula A x B in proposed regulation 5908(7), as follows:

Important points to note regarding this application rule are as follows:

where FA2 with ED and holding FA3 with ES is merged into FA1 with ES, ED of FA3 will not be counted twice

[I]t was intended there should be symmetry with the "adjustments" required as a result of paragraphs 5905(7.2)(a) and (b)…[so that] it was intended that the adjustment to the deficit of FA2 under paragraph 5905(7.2)(b) should have effect before the operation of subsection 5905(3)… . [T]herefore…for purposes of determining the amount in the description of A of the formula in paragraph 5905(3)(b)… the amount of FA2's exempt deficit immediately before the merger is reduced by the amount otherwise determined in respect of FA2 under paragraph 5905(7.2)(b) of the Regulations. On this basis, while the exempt surplus of FA3 would be reduced to $25, … Merged FA's opening exempt surplus is $200. The Department of Finance concurs… .

They use the facts in various scenarios to illustrate that a taxpayer (Canco) will realize a capital gain on the disposition of its shares of the disposing affiliate (Foreignco 1) – even where there has been a qualifying liquidation and dissolution (QLAD) election - where the adjusted cost base of Foreignco 1 in the distributed property, i.e., the inside basis, exceeds Canco's ACB of its Foreignco 1 shares.

The authors then provide an example illustrating how, on the liquidation of a foreign affiliate (Foreignco 2), with a "blocking deficit," into Foreignco 1, followed by a "QLAD" liquidation of Foreignco 1 into Canco, the application of the fill-the-hole rule in proposed Reg. 5905(7.2) can give rise to situation where the inside basis is greater than the outside basis – thereby necessitating a suppression election by Canco under s. 88(3.3) in order to avoid a capital gain as a result of this difference.

The starting facts are described at p. 222: 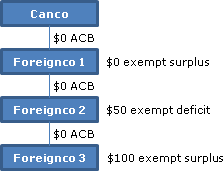 After describing the fill-in-the-hole rule, they proceed (at pp. 223-224) with the example:

The liquidation and dissolution of Foreignco 2 occurs on a rollover basis under proposed paragraph 95(2)(3).…

Because the liquidation and dissolution of Foreignco 1 is an elected QLAD, and assuming that the shares of Foreignco 3 are the capital property of Foreignco 1 immediately before the time of the distribution, Canco can elect under proposed subsection 88(3.3) for Foreignco 1 to have disposed of its shares of Foreignco 3 for PD [proceeds of disposition] equal to a claimed amount of nil. As previously discussed, the suppression election will enable Cano to fully defer the capital gain that it would otherwise realize on the disposition of its shares of Foreignco 1. Foreignco 3's exempt surplus balance of $50 will be preserved. We suspect that the suppression election was specifically intended to apply to circumstances such as these, where capital gains would arise on the liquidation and dissolution of top-tier FAs by reason of the prior application of the fill-the-hole rule in proposed regulation 5905(7.2).

Taxpayers may also consider the surplus and basis adjustments under the proposed "fill-the-hole" rules in Regulations 5905(7.1) to (7.7) addressing "out-from-under" transactions where foreign affiliates with positive surplus balances (i.e., TFSB) are extracted out from under foreign affiliates with exempt deficits. One of the consequences of such a transaction, under proposed Regulation 5905(7.6), is the conversion of the underlying TFSB into basis in the shares of the foreign affiliate that is extracted out from under the deficit affiliate. With Regulation 5901(2)(b) now applying to lower-tier foreign affiliate distributions, the conversion of surplus into basis under these rules may be a manageable implication, and in some circumstances even a desirable outcome.