This summarizes some of the CRA responses at the transfer-pricing webinar hosted by the Canadian Tax Foundation on February 3, 2020, made during the "Panel IV: Selected Topics in Transfer Pricing " segment. The CRA presenter was:

Does this three-step approach represent a change from the current approach?

MacLean: No, it does not represent a substantive change. As stated in the Budget, these are clarifying amendments. This change serves to clearly delineate the order of operations. Previously articulated proposals for the 2019 Budget appeared to suggest that s. 247 should apply first, when in fact it is (and should continue be) applied second.

To the extent that the non-arm’s length interest rate exceeds an arm’s-length rate, s. 247 will trump the prescribed rate in s. 17.

Admittedly, the CRA might have considered the proposed amendment to represent a change if it had been asked 15 years ago, but the new wording accords with the CRA’s current positions.

Calculation of penalty where s. 247(2) excess over s. 17 prescribed rate

If so, will that mean taxpayers will have access to the Mutual Agreement Procedure in a broader range of circumstances?

MacLean: Although the majority of our MAP cases relate to transfer-pricing, MAP is not restricted to transfer-pricing. There is nothing preventing a MAP request relating to a s. 18(1)(a) matter, where that matter potentially gives rise to double-taxation.

We have, in fact, been receiving fewer MAP requests lately, and more APA requests. That is probably a good thing. Taxpayers are encouraged to go that route if they face a potential transfer pricing controversy.

Golodniuk: Broadly speaking, the BEPs approach to transfer pricing appears to be compatible with s. 247. However, BEPS relies on the concept of “delineation.”

Paragraph 10.13 of BEPS chapter 10 considers a loan made by Company B:

Company B would be unable to service a loan of [full] amount.

Consequently, the remainder of … the advance would not be delineated as a loan for the purposes of determining the amount of interest which Company B would have paid at arm’s length [emphasis added]

In Canada, we might call this “partial recharacterization,” where part of the delineated amount remains as debt and the rest is recharacterized as equity. Are Cameco and Agracity compatible with this kind of approach?

It can be difficult to reconcile s. 247, which is brief by the standards of tax legislation, and the OECD guidelines, which are much longer than tax legislation. We try and apply our domestic legislation in a way that respects the guidelines.

It is worth considering that (a) and (c) have significant overlap with (b) and (d) in practice. We find that applying either is actually a similar exercise. CRA is also more willing to apply (b) and (d) today than it was before. The tax community sometimes described some of CRA’s uses of paras. (a) and (c) as “backdoor recharacterization.”

It is no longer CRA’s position that (b) and (d) are a last resort, which is one of the reasons that we retired IC 87-2R. This is not to say that we are looking at absolutely every transaction through a recharacterization lense – our interest in recharacterization relates chiefly to artificial, tax-planned structures.

Nikolakakis: CRA released a Notice to Tax Professionals in July 2019: 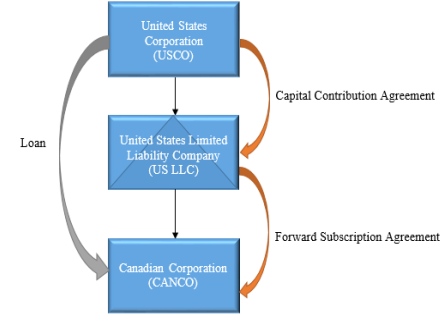 “The Canada Revenue Agency (CRA) confirmed that it has resolved a file regarding a hybrid mismatch arrangement […] on the basis that paragraphs 247(2)(b) and (d) of the Income Tax Act and transfer pricing penalties applied.”

MacLean: This is a structure that CRA has been finding in the field for some time now, and CRA concluded that arm’s length parties would not have entered into this kind of arrangement. The closest arm’s-length analogue would be an equity transaction rather than a debt transaction.

Nikolakakis: Arm’s length parties would not have 100% equity either, so it’s unclear how to resolve this. Do you recharacterize the hybrid lending arrangement as part-debt, part-equity?

MacLean: The gist of our position is that it is being recharacterized as equity.

Nikolakakis: Is it fair to say that CRA is more open to doing APAs on pricing financial transactions than it would have been in the past?

MacLean: The CRA has been reticent about doing APAs on restructurings. If a taxpayer wants an advance pricing arrangement on its restructuring, e.g. to get its IP safely into a low- or no-tax jurisdiction, that is not something on which the CRA would want to provide certainty. However, the CRA would like to become bolder about business restructurings for commercial purposes.

Sophisticated financial transactions are not as easy a fit as a “sale of widgets.”

In general, though, I am a fan of APAs – get the facts on the table, and arrive at certainty, in a bilateral or even multilateral APA.

S. 247 application to FA to FA or Cansub to Cansub transactions 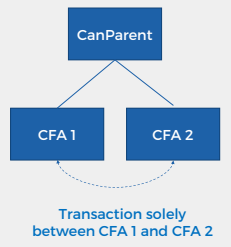 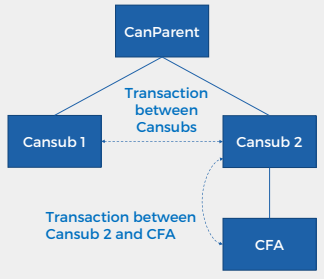 Nikolakakis: As written, s. 247 can apply to transactions that do not directly involve a Canadian-resident taxpayer. This could have consequences, e.g., to the FAPI of a Canadian taxpayer or adjustments to the surplus balances of a foreign affiliate.

CRA has a 2017 position (26 April 2017 IFA Roundtable Q. 2, 2017-0691191C6) that transfer pricing rules can apply in determining the FAPI of a Canadian taxpayer even if the transaction is solely between two non-resident persons.

Conversely, s. 247 could apply to a transaction between two Canadian residents if a foreign affiliate happens to be involved in the series of transactions.

MacLean: I think it is clear that, under the Income Tax Act, a non-resident is a “taxpayer” – although admittedly that is often irrelevant. A taxi-driver in Switzerland is probably a “taxpayer” for the purposes of the Act, but that usually has no significance.

I think we should bring a reasonableness standard to this – if somebody is up to shenanigans, such as shifting what should be taxable surplus to an exempt surplus jurisdiction, or generally entering a series of transactions with a view to lowering a taxpayer’s Canadian tax liability, we would want to invoke s. 247. Conversely, we want to avoid needlessly issuing CDOC requests to 75 foreign affiliates. 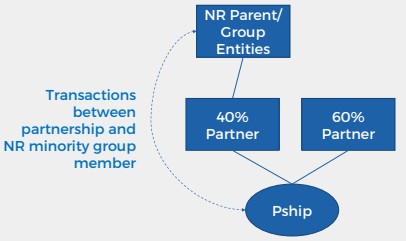 As written, s. 247(2) may apply to a partnership, where a party deals not at arm’s length with any member of the partnership. For example, it could capture members of the corporate group of a minority partner – the slide shows a 40% partner, but it could just as easily be a 1% partner.

MacLean: I haven’t seen situations like the one described, and it’ is probably not a big audit focus.

We often see people misreading “arm’s length” as “related.” To the extent that people have the look and feel persons dealing at arm’s length people, that will generally be fine, and we’re not likely to go out of our way to engage s. 247. Conversely, to the extent that people really look and feel like they’re not at arm’s length, regardless of whether they’re related, we’re more inclined to look at things expansively.